Skip the New Year’s Resolution… Make a SMART Goal Instead!

*This post contains affiliate links from which a make a small commission from purchases made. Thanks!

Well, 2014 is coming to end and we’re heading full speed into 2015. It’s about this time of year when almost half of Americans begin making those “New Year’s Resolutions.” You know, they are typically something like “To lose weight,” “To get fit and healthy,” and/or “To get organized.” And how often are these resolutions accomplished? According to Statistic Brain, only 8% of the time! Since the odds aren’t really in your favor of achieving your New Year’s Resolution, why not try something different this year? Let’s try to make a S MART New Year’s Goal and Plan instead! 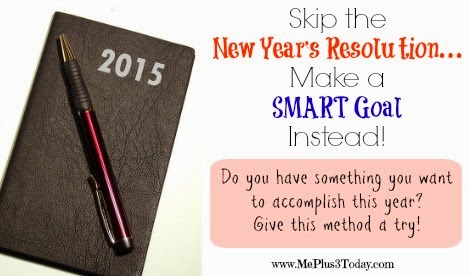 The idea of setting a SMART Goal and Plan instead of a New Year’s Resolution isn’t something I came up with on my own. It’s actually something I learned though visiting my therapist. Last year, as 2013 was wrapping up, we began discussing what I wanted to accomplish in 2014. At the time, I thought it was silly to even think that far ahead, and I scoffed at the idea of a resolution. But as my therapist explained more about setting a SMART Goal and Plan, I decided that it couldn’t hurt to give it a try. And I’m glad I did! 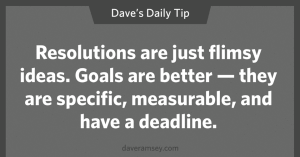 OK, so are you wondering what it even means to make a SMART Goal and Plan, and how is that any different than a New Year’s Resolution? Let me start explaining it with a generic example, and then I will go into my specific goals that I had set for 2014.

SMART Goal: To lose 10 pounds by July 1st, 2015.
Plan: Start out by eating a serving of vegetables during lunch and dinner for a 3 weeks. Then add on that there will be no visits to the vending machine at work by bringing in nutritious snacks like almonds and fresh fruit for the next 3 weeks. Add on not to eat after 7pm 3 weeks later. Then slowly add in work outs for 40 minutes after work on Monday and Wednesday, and 40 minutes on Saturday morning.

Do you see the difference?

The Goal is:
S pecific – not just a general idea of losing weight
M easurable – 10 pounds
Attainable – it is an amount that can be lost during that amount of time
R ealistic – it is not an unhealthy or impossible to goal to reach, and it is also not way too easy. It is still something that has to be worked for
T ime-based – a time period of 6 months is given

Similarly, the Plan is:
S pecific – not just a general idea of eating healthy and working out
M easurable – 40 minute work outs on specific days, zero visits to the vending machine, 2 meals each day
A ttainable – it is all simple changes that do not require too much extra effort. And it is slowly implemented. It isn’t something that has to happen over-night, but a gradual change.
R ealistic – It doesn’t jump in to doing too much at once. The changes aren’t drastically different from a normal routine.
T ime-based – 3 weeks to accommodate each new change. Workouts are 40 minutes long.

OK, so I hope that example helped illustrate the differences between a SMART Goal and Plan versus an average New Year’s Resolution. Basically, you have to decide what you want, and then figure out HOW you are going to do it.

As I look back at the SMART Goals and Plans I set for 2014, I realize that I did pretty darn good at accomplishing them. I had scribbled them down on a piece of paper that I kept in my wallet, and discussed the plans for them with my therapist. The paper wasn’t something I looked at every day, but every few months, I might pull it out to remind myself of where I want to go this year. And it really helped! I think I accomplished about 60% of my goals which is fantastic, compared to most years where I accomplished 0%!

Below are my goals, which are pretty specific to my life. They also weren’t as SMART as my example above, but I wanted to highlight that just having a plan in place really helped keep me moving forward with them. Hopefully these will give you an idea of goals that you might want to set!

Plan: Begin by taking a trip with the kids to a local grocery store during a typically non-busy time and with no purpose to begin building confidence. After accomplishing that, begin going to the store to pick up needed items with the kids. Next, take them to a new store. Lastly, bring them to do fun activities.

RESULTS: I started out by going to the grocery store on a Sunday morning with the kids, just to wander. By summer time, I was able to take them to the park and even strawberry picking! While going out with all 3 is exhausting, I am confident that I will be able to do it. This was by far my biggest success out of all the goals.

Plan: Skip over the parenting articles I come across where just the title strikes me as judgmental. Learn to feel confident in my parenting choices. Remind myself of my unique situation. Remind myself that most other parents feel judged as well.

RESULTS: I have learned to identify what my “triggers” are that make me start worrying and feeling judged. I’ve also learned to “go with the flow” more, which has helped me feel a little more confident with parenting. However, I do still fall into “worry holes,” where I get caught up in something I heard, read, or saw. But overall, I do spend less time worrying. I am going to continue to work on this one for 2015 and make this goal SMART.

. Begin networking with people in areas that interest me. Take risks and step out of my comfort zone.

RESULTS: This is another big success for me. I am not ready to write about the details of this yet, but after taking the Myers-Briggs Career Assessment, the StrengthsFinder 2.0

(both of which I HIGHLY recommend), and meeting with many other people in different careers, I have finally landed on my passion and my plan. Stay tuned…

Plan: Take the time to observe the kids while they play. Allow for more time to get ready in the morning and the evenings. Stop trying to make everything fit into a specific schedule.

RESULTS: While I do occasionally sit back and really watch the kids play, I still struggle with rushing and being distracted by everything that needs to get done. I’m going to create a better SMART plan for this goal for 2015.

5) Goal: Take care of myself and my health to reduce illness, stress, and fatigue.

RESULTS: I failed miserably at this goal, despite having a plan. I don’t think my plan was detailed enough. I am going to try this again and make this goal SMART.

As you can see, I feel like I did well on 3 out of my 5 goals. You will also notice that my scribbled down goals and discussed plans didn’t completely follow the SMART acronym. But each one had a plan in place in order to achieve the goal. This was by far the best motivator for me.

This year, I actually plan to be more formal in my goal setting, and keep an electronic file instead of my scribbled notes. I also am going to be sure to make my Goals and Plans better follow the SMART acronym.

I can’t wait to share the results with you next year!

So, now it’s your turn. Did you set a “resolution” or a “goal” for 2014? What were the results? Do you plan to do anything different this year? Leave a comment and let me know! 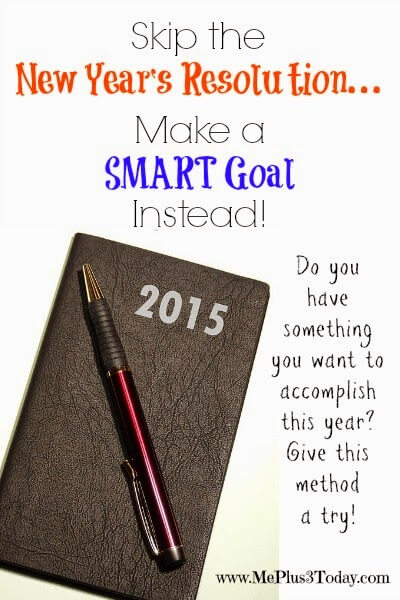 5 Comments on "Skip the New Year’s Resolution… Make a SMART Goal Instead!"

Love the acronym. So true! Thanks and pinned! #ibabloggers

This post is great for just about anyone who feels discouraged by New Year's Resolutions and are looking to make S.M.A.R.T goals. Thank you for sharing! #ibabloggers

I really like this acronym this is something that I know I struggle with. I always have the best intentions and they almost never get completed. I really want to expand my business and work on having a second baby. Both of which are in and out of my control at the same time. I try not to make too many because I know the statistic you mentioned is correct. #ibabloggers.

I had to do a SMART goal when I joined my school's weight loss program. It makes perfect sense. Great post!

Great post! I pretty much make all my resolutions SMART goals! 🙂 Makes me get much more done when they're specific and has a deadline.