I’ve been browsing Pinterest and reading A LOT of different blogs lately, in pursuit of becoming a better blogger.  It’s fun and I’m reading a lot of interesting tips for parenting and some great activity ideas for the kids!

And it has also made me see that I’m not the only one struggling with this rollercoaster of motherhood.
Which leads me to:
I happened to stumble across this Mommy Reality Challenge from A Lavender Life.

This week’s challenge was “Mommy’s Meals.”  The idea was to capture the Mommy Reality of serving up something you probably would NOT brag about.  The food you serve behind closed doors because you don’t want anyone to know that you aren’t the perfect mom.
It made me feel SO GOOD to see these other mommy’s posts!
I’M NOT THE ONLY ONE!!!!
Since I am trying to take my “mask” off and show the truth behind what our life is like, I thought this was a perfect challenge to join!
So, here is the Mommy Reality I’m going to share.  It’s not actually a meal, it’s snack time from a few weeks ago.
On this particular day, I was totally being Mom of the Year because I was actually running around like crazy trying to get ready to go out with friends that night!  I hope you can “read” my sarcasm…
Yes, I was basically requiring the kids to have a lot of independent playtime so that I could pack a bag and get things arranged because I was going on an OVERNIGHT outing with some friends.  I don’t get out much, so I’m justifying my lax in parenting because this type of thing doesn’t happen often… 🙂
Anyway, I made the mistake of leaving the pantry door open, which meant easy access for little hands… When it came time for snack, the girls ran over to the pantry and started digging in.  They were able to grab a box of waffle cones and a bag of Tostitos

.
Once they had those items in their hand, there was no changing their mind.  That is what they wanted for snack!
Yes, I could have said “No,” taken the stuff away, and served them up the raspberries I had in the refrigerator instead.
But ya know what?  I just DID NOT feel like dealing with the tantrum that would cause.  They hadn’t spent a lot of time with me that day, so they were already on edge.  It would have been a big one…
So I just rolled with it.
Here’s Violet enjoying her waffle cone and Tostitos

for snack.  But hey, at least she’s drinking water… That balances this snack out, right? 🙂 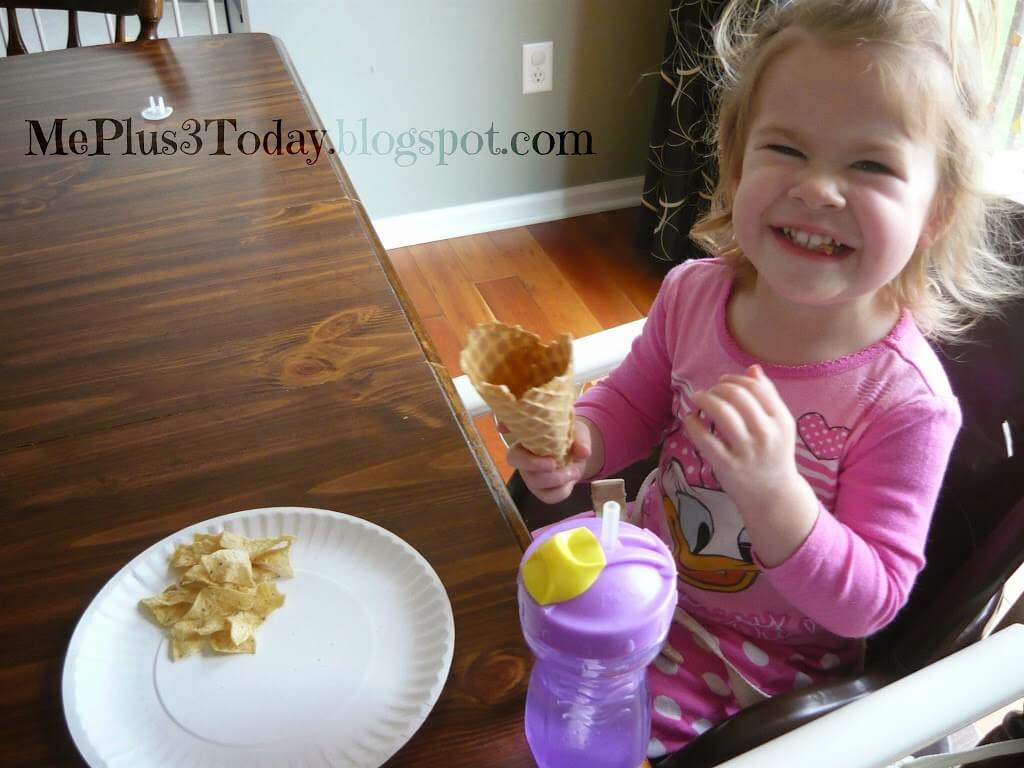 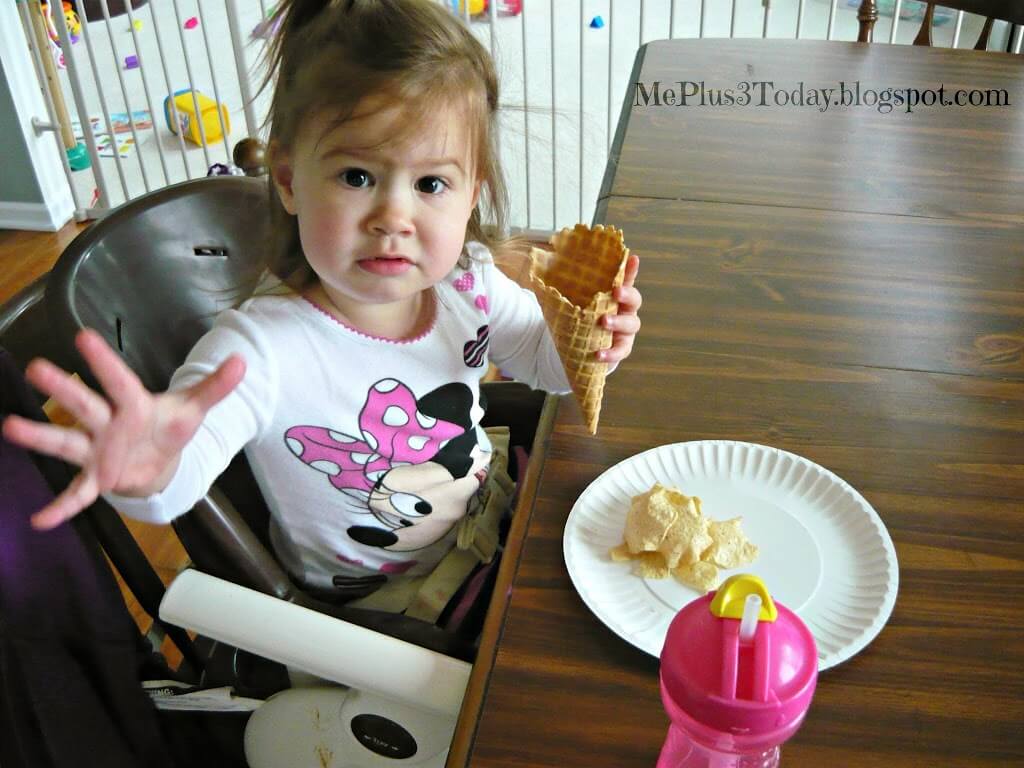 Will wasn’t as independent then as he is now, and he didn’t really care about what he was having for snack.  So I gave him Veggie Straws

.  It has the word “veggie” in it, so it makes me feel better about giving them to him… 🙂 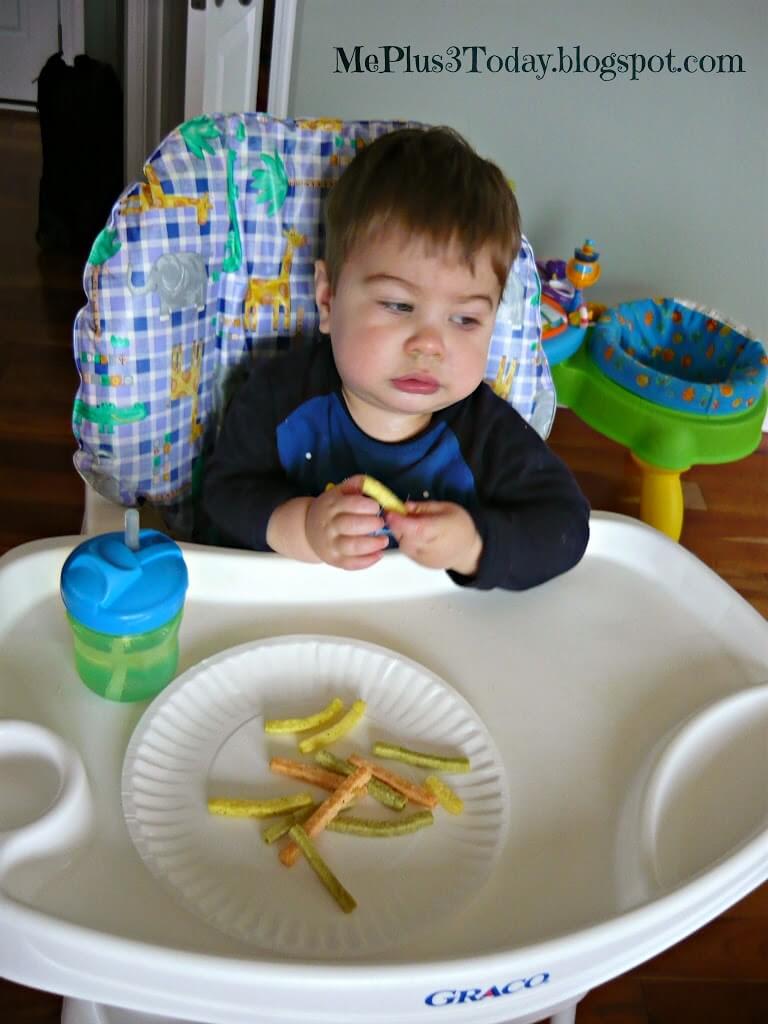 Oh, and here’s a bonus picture of them enjoying their awesome snack, with another dose of Mommy Reality in the background, like I talked about in my No Makeup Selfie post… Yes, that is the ‘Happy Birthday’ sign from Will’s party still up on the wall.  My excuse was that we were going to celebrate his birthday for the entire month of April… This photo was taken in May… 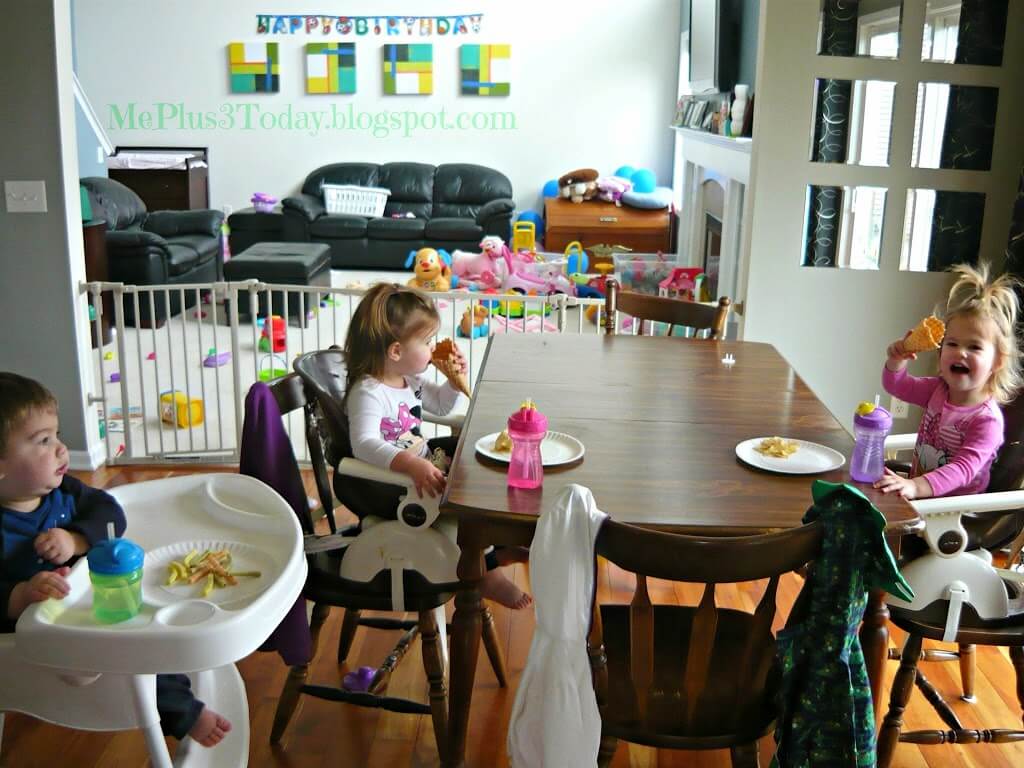 So there you have it!  My Mommy Reality = waffle cones & Tostitos

What Mommy Reality meals or snacks have you served your kids?  Let me know in the comments below!

And that’s a little bit about Me Plus 3… TODAY! 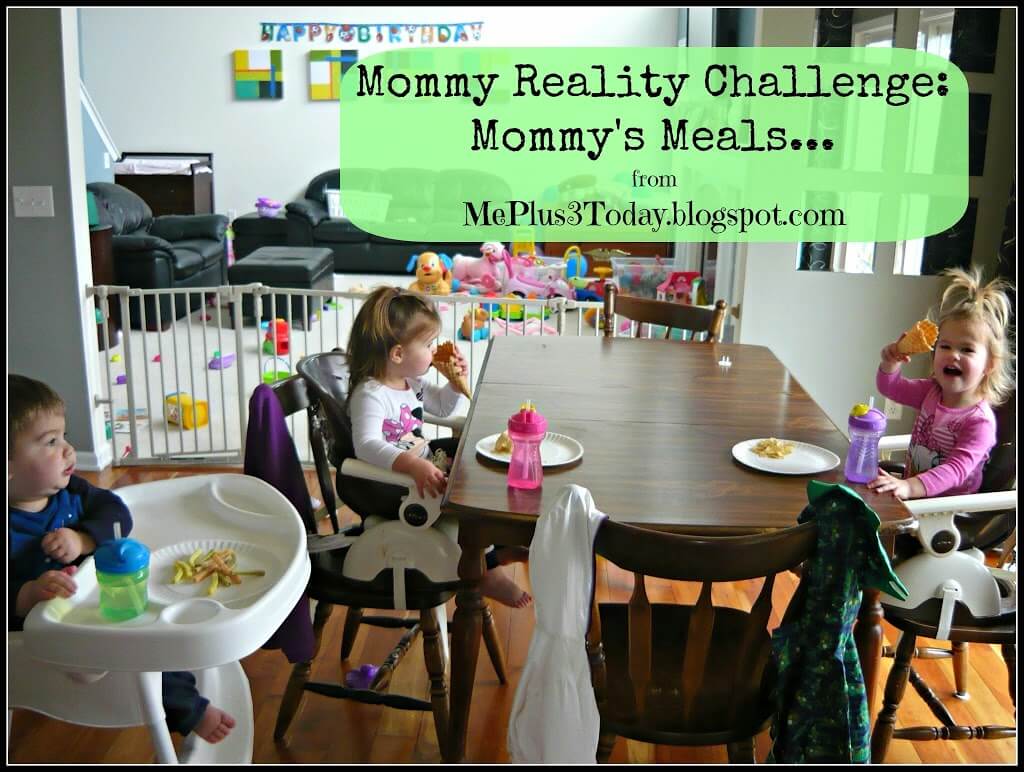 Sometimes it is so much easier to just go with the flow and waffle cones and Tostitos have all kinds of good things in them. So this was an all around win in my book 🙂 So glad you linked up with our Mommy Reality Challenge!

Haha, thanks so much! It makes me feel much better! 🙂 I'm looking forward to seeing what the next challenge is!

Stopping by from the HDYDI link and I couldn't agree more! I totally got dubbed by the veggie straws. Well, we got them for free and I looked at the nutrition label when we got home … are you serious? I have also given my daughter the waffle cone, animal crackers (as a snack), pop tarts (although not a whole one), ect. I don't feel bad because I don't do it every day. We've

Ok, good, I'm glad I'm not the only one! Yeah, I definitely need to child-proof the pantry by either putting a lock on it, or moving everything up on higher shelves! 🙂 Thanks for stopping by and have a great night!

For the longest time, my oldest daughter would only eat raven noodles or chicken nuggets. It took almost 2 years to break that habit! She's definitely turned her eating habits around one she started school. <br />(Thanks to our little school for healthy eating programs and Straight From The Farm)<br />Pop tarts for a snack used to be a go – to for me when I worked 60 hours a week. You're

Thanks! It feels good to know I'm not the only one! And that's a good point, &quot;at least my babies are eating!&quot; I know for a fact that I didn't eat the best as a kid, and I'm doing OK right now! I need to remember these things! Thanks so much for reading and have a great day!

[…] in it for a while now. You can see my previous posts by clicking the following links: Mommy’s Meals Moment of Trouble The Laundry Room The Essence of […]