The “In Between” – Monday Mourning Widow Series

As I’m sure you can imagine, wedding anniversaries as a widow are extremely difficult days to endure.

Last year, our wedding anniversary was actually the first “holiday” I had to go through after Chaz passed away. Needless to say, It. Was. Horrible.

Now I’m on to the “seconds.” The second wedding anniversary without Chaz was actually a few weeks ago, on September 16. I wanted to write about it sooner, but I wasn’t really sure what I wanted to say about it.

But I finally decided that I could use the reflections I had on that day as a reminder, or a even a lesson, for married and unmarried people alike. 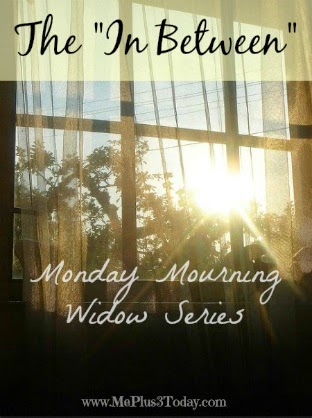 When I woke up on our anniversary day this year, I did my best not to think about it. I got the kids ready as usual, and dropped them off at daycare. But I had taken the day off from work so that I could let the emotions hit me at full force.

It wasn’t until I drove out of the daycare parking lot that I lost it. Crying in the car has pretty much become a new normal for me.

When I got back home, I slumped in front of my computer to aimlessly “do nothing.” Which meant Facebook was the first thing I opened.

And it gave me another wonderful reminder of what day it was. Right at the top of my news feed, it said: “Happy Anniversary! You’ve been married to Chaz for 8 years! Share your favorite memory from the past 8 years…” It even auto-populated photos that both Chaz and I were tagged in from over the years.

And so I began reflecting, trying to figure out what my favorite memory actually was. What was I going to share? What was so special that it could culminate our 8 (but really only 6.917, since he passed away a month before our 7th anniversary) years together?

But I was overwhelmed. There were SO MANY good times, great times , that we shared. I couldn’t pick just one!

And then it hit me. I knew exactly what it was. It was what I’ve missed the most since he’s been gone.

My favorite memory was what I refer to as the “in between.” So this is what I posted: 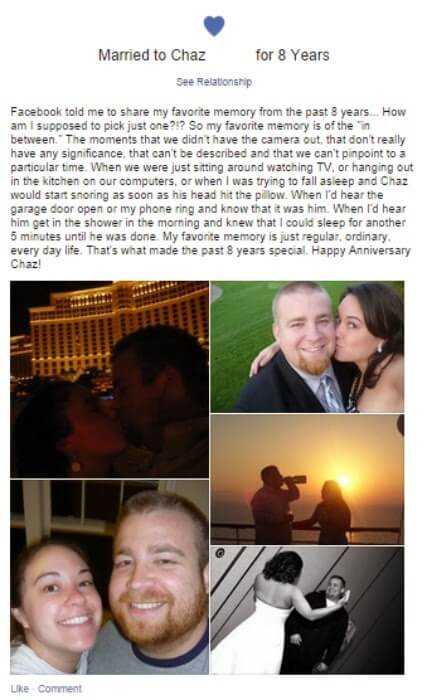 Yes, technically that is more than just one memory. But it can all be summed up into that one term – the “in between.”

So my reminder for everyone out there reading this is to cherish those “in between” moments. Because that is what life is made up of. We aren’t doing extraordinary, memorable things during every minute of every day. We’re washing dishes, cooking dinner, brushing our teeth, reading a book, driving to the store, and every other mundane activity that makes up our days and weeks.

So remember, while they don’t seem important, they are. Because they are “life.”

Remember to cherish the “in between” moments of your life. Ultimately, they are what make up life.

A few weeks after our anniversary, I saw this quote by William Martin. This pretty much sums up what I am trying to say, much more eloquently. But it’s not just about doing this for our children. We ALL need to do this for ourselves too. And that’s the lesson I hope you can take away from reading this post. 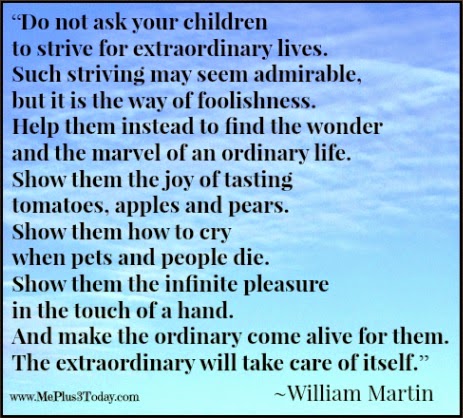 And that’s just a little bit from Me TODAY!

6 Comments on "The “In Between” – Monday Mourning Widow Series"

What a beautiful post that stresses perfectly we should all enjoy even the little moments in our life that seem insignificant. Thank you for sharing.

Thanks so much! I think we all need a little reminder like this every once in a while!

Thank you for sharing this! It's been a little over 3 years since my husband passed away, and I still experience moment of that intense sadness and loss. But God is good and my daughters and I are healing and making a beautiful life for ourselves, which is what Robby would have wanted. Bless you as you continue to share! I sometimes share things about my grief and loss on my blog as well,

Hi Joan, thanks for commenting! I'm always looking for other widow blogs to follow, no matter if they focus on grief or just life in general! I'm looking forward to following you and reading more!

Sarah you are such strong and courageous, fueled by the Holy Spirit! Still, I wish I could give you a great big, huge hug right now! Thank you for blessing us with your heartfelt perspective xoxo

An important lesson for everyone. Thank you for putting into words and sharing it with us. You sure have a way of inspiring me. (((((&lt;3)))))