Build Your Own Village

July 23, 2014 - 8:56 pm | Parenting
Have you seen this article titled “I Miss the Village” published on The Huffington Post pop up in your social media feeds lately? It seemed like an article I would try to avoid, but again, the frequency of seeing it lead me to read it.

If you don’t know what I’m talking about, click here to read the article before you go on, otherwise this post probably won’t make much sense to you.

I know I’m in a very small minority with my thoughts, but I’m not entirely sold on this article. And this is coming from me, who needs a “village” now more than ever.
I just think the author paints a very pretty picture, but was the “village” she’s referring to really like that? I think for many of us, if we were in a time like that we’d be “missing” the modern conveniences we “never had.” It’s like they say, “The grass is always greener on the other side.”
I’m not sure if the author literally means she wants the fairy tale she describes, because in my opinion that’s what it is, just a fairy tale.  I just don’t think the humble world she describes was truly what life was like in the times and places when “villages” existed.

So maybe what she is really missing is just comradery, friendship, and support. 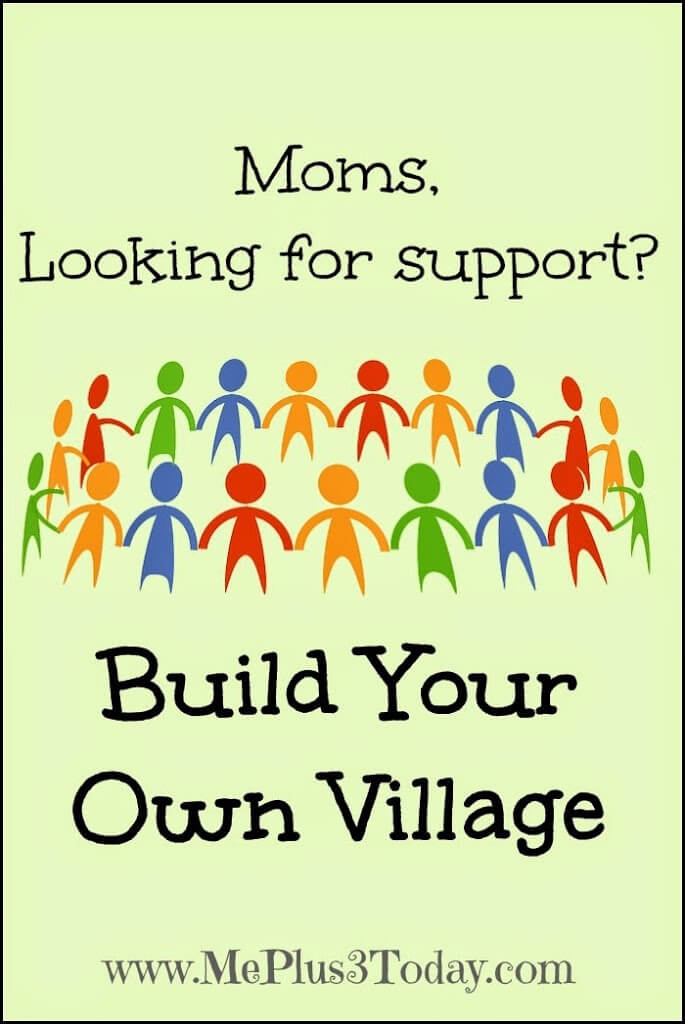 For many, that could be easier said than done.  It comes natural to some, while others struggle.
I am part of the latter group. I would definitely say, as a shy introvert, building my own village is quite difficult. But that doesn’t mean it’s impossible.

I’ve learned that the sense of community is not going to just knock on my door. A village can’t build itself. I have to do something to get it! I literally have to force myself to get out and socialize, because I know that is the only way that I will make those bonds that I want and need. Nobody is going to do it for me, but myself.

So I’d suggest, instead of sitting back and wishing for something, make it happen for yourself.

Nobody is forcing you to have these “blinking devices.” So put down the smart phone. Turn off the TV or computer, and instead of watching what is happening in your town or city, go out to experience it for yourself. Because you can’t build a village without other people!

Then take a deep breath, and introduce yourself to the mom at the park, to your neighbor, or whoever. Be honest when you approach, say that you want to make a new friend. What’s the worst that will happen? She says “No” and thinks you’re crazy?  Oh well, then that’s not the type of friend you were looking for.

I recently emailed a woman I met once in a meeting at work and said, “Would you like to have lunch sometime to chat. It would be nice to make a new friend here.” If you know me, that’s pretty monumental that I was able to do that. So if I can do it, you can do it.

Because how else will change happen if we don’t start it ourselves. And what’s even better is that our children will see what we are doing. They will learn from our actions and probably continue the movement into the next generation. And maybe that idealistic village will actually return someday!
But for now, maybe your “village” isn’t full of people that you cook with and clean with. They aren’t there all day, every day. But you can still find members of your village that you can call at 5pm on a Sunday evening, when you haven’t showered in 2 days, are still in your jammies, your kids’ entire dinner has ended up on the kitchen floor, there are toys everywhere, and you just don’t think you can make it through another minute on your own.

They’ll show up with a pizza in hand, ready to clean up the kitchen. They’ll pick up the toys and read to your kids. They’ll even offer to keep them occupied so that you can shower in peace. They’ll see you at your worst, but they won’t judge. And the members of your village don’t even need to be mothers! [True story.]

And you know what? You would do the exact same thing for them.

So in case you haven’t understood what I’m suggesting, this is the moral of the story:  Stop wishing, stop talking about what your missing, and try to build your own village!

And that’s a little bit about Me… TODAY!

If you liked this, please subscribe to have the latest posts from Me Plus 3… TODAY! delivered straight to your  inbox.  Just fill out the form below.
(I hate spam too, read the disclaimer for more info.)

14 Comments on "Build Your Own Village"

RIGHT ON SARAH!!! This is EXACTLY what I need/want/am looking to build!! I've said it before and I'll say it again …. IM SO PROUD OF YOU!! 🙂 I know how hard it is for you to put yourself &quot;out there&quot; but keep doing it… it will be worth it! If only life and motherhood could be like Pew…. a whole bunch of people in one place ready to help you out and hang out when you need it! 😉

Thanks again, Kate! It really is hard/scary to approach people, but it's just something I know I need to do, and I'm learning to get better at it. It doesn't mean I exactly enjoy it yet though! 🙂 Life like the Pew would be awesome! 🙂

So I'm in your camp – bad with the village – but not for lack of trying. It just that people where I am are too standoffish or something. Then some become really good friends and I wonder how. My village is in my church – a group of a dozen who broke off for various reasons and study for ourselves. We've become really tight friends but I'm still not a shout out type DURING a crisis.

Yes, the virtual village! I wish I would have mentioned that! As an introvert, that is really the place I am most comfortable. I have also had my share of people I just didn't mesh with and others who I know will be friends for life. And it's definitely been a learning process for me to ask for help when I need it, but I am always so grateful once I get the courage to do it.<br /><br />

I hadn't seen the article you cited before you mentioned it. I agree with you completely. It's essential to build one's own village. Now, some of us are more likely to start a group or invite people to participate in events than others (I'm an organizer) while others are better at joining things (okay, I'm a joiner too). But it takes effort. A village doesn't just exist…

Thanks Sadia. That's a good point, that a village is all about a give &amp; take relationship. A person can't expect a village of support without also giving support too. Thanks for reading and giving your input!

I agree we all must build up courage to reach out to one another. Building community (or a modern village) provides moms with the backbone to handle all the ups and downs of this fabulous journey.

I like how you say that we need to &quot;build up courage.&quot; It really does take courage (at least for those like me), to approach other moms. But finding that courage is necessary to get the support. Thanks so much for reading and sharing your thoughts on this!

This is a great post! I found your site via the Thoughtful Spot. I sometimes find myself wishing that things were more the way they used to be in the &quot;village&quot; sense. You're right though, putting down the phone, connecting with another mom at the park, or the store or wherever is absolutely the way to go. So glad I found you!

Thanks so much for stopping by, and taking the time to comment. I'm glad you liked this post! 🙂

I think it's sad that we can't intervene with other people's children when they need it. Thank you for sharing. Hello from How Do You Do It? Parenting Link Up.

Do you mean when the children need it, or when the parents need it? Either way, depending on the situation and how well you know the person, all it might take is just asking the parents if they need a hand, or if you could help them with something more specific. So I don't think you necessarily can't intervene, it never hurts to ask!

[…] Build Your Own Village – Me Plus 3 Today – Have you seen this article titled “I Miss the Village” published on The Huffington Post pop up in your social media feeds lately? It seemed like an article I … […]

[…] appreciated Sarah of Me Plus 3 Today‘s post about getting out of your comfort zone and just creating your own village, instead of moaning about not having one. This is especially amazing as she herself is an […]