In my post about One Year of Loss, I mentioned that I was going to begin a series specifically about widowhood.

Posts for this series will go up each Monday. This was so I could be super creative and use my alliteration skills… Hence, it’s called the Monday Mourning Widow Series! (Yeah, I said “hence.” Fancy, huh?)

What I am about to share for the first post of the series, was actually written about 2.5 weeks ago. I’ve had it in draft status because I wasn’t sure if I wanted to share it. But then I reminded myself that this blog is about taking the mask off. Hence, you get to read it now. (Whoa, I’m throwing hences out all over the place!) 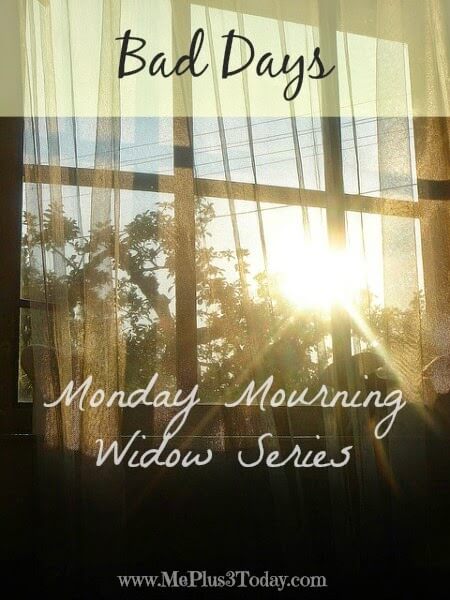 I can talk about doing positive things to keep me going through tough times, but that doesn’t mean I’m not still having an incredibly hard time with this new life I’m living.

Some days it is easier to manage the pain.  And others it’s not.  Today fell in the “Not” category… It was a very bad day.

And I’m not exactly sure how it happened.  Grief is like that.  You can be chugging along one minute, just going with the flow, and the next minute… BOOM!  You feel like the wind has been knocked out of you for no apparent reason.

I’m not saying other people don’t have it worse than me.  I am well aware that there are others out there who are in a worse situation than I am.  I have actually been very blessed.  I have a job, I’m able to feed the kids, and we have a roof over our heads.  Not everyone can say that.

But that doesn’t mean it doesn’t HURT .

Because it really does.

My goal for this blog has been to take the mask of the life a widow, or at least, MY life as a widow.  So let me just tell you about my day.  And please understand that I’m not writing this in order to complain, or to solicit sympathy.  That is not my style.  I just want to share that despite some of the things I post, life isn’t always rainbows and unicorns.

It’s Monday today, which means it’s back to the work-week… But since I’ve pretty much lost all concept of time, it just feels like any other day.

Except for the fact that I have to wake up ridiculously early.  Get myself ready. Then wake the kids up, change diapers, get them dressed, give them breakfast, put their shoes on and get out the door so I can get to work at a reasonable time.

Why isn’t there an app for that? I’m sure I’m not the only one in the world who would appreciate it! 🙂

Anyway, this morning I woke up about 10 minutes late, which is never a good thing.  Somehow those 10 minutes equate to showing up 20 minutes late at work.  I don’t know if the kids are pulling a prank on me, but when we are running late, they decide that is the best time to move s o  s l o w through our morning routine. Are they old enough to know how to prank someone?!?!

Well, while I was getting the girls dressed, I had a nagging feeling that I was forgetting something. I glanced at the calendar as I was grabbing the milk out of the refrigerator, and realized I had a doctor’s appointment at 9am!

While this threw me off a little, it actually helped because now I wasn’t running so late! Yay! I did, however, feel guilty that I was letting my boss know about the appointment at the last minute.

I eventually got everyone loaded into the mini-van and we arrived at the daycare center. But once we got there, the girls became extremely clingy. Which of course made the actual “drop-off” seem nearly impossible.

In general, drop-off is NOT my favorite part of the day. This situation is why, in my “before-life,” I never did it.  Chaz was always in charge of bringing the kids to daycare because it was hard enough for me to just be apart from them all day. I missed them so much! And to leave them there, crying for me, would have been torture.

But now, it’s something I have to endure each day…

Well, once the kids were safely in their rooms at daycare, I drove to my appointment. It was just a follow-up regarding a new prescriptions I was given.  It should have been easy, but we had to discuss my current “situation.” Talking about what has happened over the past year tends to drudge up all the feelings that I need to keep tucked away in order to function through a work day.

So that was where my day started to go downhill.

And I ended up crying most of the drive to work.

Once I got to work, I just could not focus. I wasn’t able to pull myself out of my tearful state. And I felt like I had a million things running through my mind at once. It’s almost to the 1-year-mark since Chaz’s death, and I just can’t stop thinking about it.  My head just wasn’t “in the game.”  I tried all my mental exercises that I’ve been taught in therapy to regain focus, but nothing worked.

And then a helicopter flew over our building.

I don’t think I’ve ever mentioned it in this blog, but Chaz was airlifted from a small hospital to a bigger hospital in our area.  I saw him get loaded in, and watched as it took off and flew away…

Hearing one fly over sent me over the fragile edge that I was barely balancing on.

I ended up quickly grabbing my laptop and hiding in a conference room, where I started sobbing.  I had no idea what to do.  The emotions were almost paralyzing, and I just could not work.  But it’s not like working is “optional.”

I’ve had episodes like this in the past. I would usually go out to my car and cry. Or I’d go on a drive for a while to clear my head.

But today just felt different. Not to mention the fact that I was stranded in a conference room. There was no way to avoid passing other people to grab my purse and keys back at my desk.

I finally gave up on even trying to work through my tears, and messaged a co-worker informing them that I was not OK.  I was also able to get a hold of my boss and let her know as well.

Just those 2 simple acts were actually monumental for me. When I am at work, I do my best to pretend that I lead a normal life. But clearly, it is far from normal.

Today, I was able to succumb to that fact.  It’s actually incredibly tough for me to ask for help or admit weakness.  But I’ve been learning how to do that over the past year.

I know, it sounds weird that I’ve learned to “act weak.”  But it’s true.  I think many of us need to learn to accept vulnerability, and to realize that we can’t do it all on our own.

Which is what I did today. 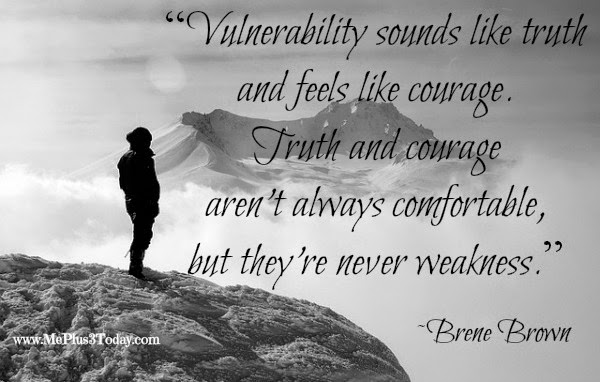 Well, I ended up leaving work at lunchtime because I wasn’t able to pull it together. I went home and cried for a long time, then took a short nap before I went to pick the kids up from daycare. That helped to finally turn my mood around so that I was able to handle the kids in the evening.

I know, to an outsider, it doesn’t look like anything outrageous happened.  But it really was a very bad day.  The emotional turmoil is so difficult to describe to someone who hasn’t felt it before.

But I really just needed to share that despite the fact that I can smile and laugh, it doesn’t mean that I’m not also experiencing the constant pain of a broken heart.

What do you do to turn a bad day around? Leave a comment and let me know!

And that’s a little about Me TODAY!


If you want to hear more from Me Plus 3… TODAY!, please subscribe to have the latest post delivered straight to your inbox!

Tagged Me. Bookmark the permalink.

I get the helicopter thing. Three weeks ago we lost my sister-in-law suddenly to a cerebral hemorrhage. They were camping at Ludington so she was Aero-Med'ed to Butterworth. She was an organ/tissue donor and it took about 48 hours to get all the recipients lined up. We knew she was going to the OR about 8:00, so after we all said our individual goodbyes, we listened to her favorite music at

Wow, I know how hard this must have been to share. I too am an incredibly private person and also do not like to ask for help. <br /><br />You are incredible and thank you for sharing your story

Triggers are everywhere…. I know from my own experience and they usually come out of nowhere. When it hits you , it hits you hard and it won't be for a long while yet that you can &quot;pull&quot; yourself out of the memory it sets you into. I've had so many days similar to this when it literally takes EVERYTHING in me to just barely survive…. but I can't imagine doing it solo bc

Just wanted to let you know I'm thinking of you. I can only imagine the pain you're feeling, especially this time of year. I'm glad that day did turn around.

Thank you for sharing your story.

Sarah I'm so glad you've decided to do the Monday Mourning series! I so hope that it is cathartic and cleansing for you and I know it will also lend readers alot of insight and perspective! Thank you for your willingness to share. May God bless both you and your readers abundantly through this blog xo